On this guide you will find much more information that you would need before you book your gorilla safari in Rwanda.

Volcanoes National Park lies along the Virunga Mountains, with 8 ancient volcanoes, which are shared by Rwanda, Uganda and the Democratic Republic of Congo.

Just a short two to three hour’s drive from Rwanda’s capital of Kigali, the park is a central location for exploring some distinctly Rwandan experiences.

While a visit to the mountain gorillas is often at the top of visitor, the dramatic landscape also offers thrilling hiking and visits to the fascinating golden monkeys.

Others activities to take around the Volcanoes National Park include the Musanze Caves $ 50 USD and the Iby’wacu Cultural Village $ 20 USD per person and to experience any of these you need to book with local Rwanda tour company in advance.

This Conservation Video is published by National Geographic Society.

Step into Rwanda’s beautiful Volcanoes National Park, where a community is uniting on the front lines of a region in crisis to protect critically endangered mountain gorillas.

If you have more time at Musanze do not miss to visit the Dian Fossey Museum which is so much educative the great work that was done by Dian Fossey towards the conservation of the mountain gorillas in the Virunga Mountains.

Then for those interested to participate in gorilla conservation on your gorilla safari in Rwanda visit the Gorilla Doctors facilitates and they will take through the work done towards the mountain gorillas.

The Volcanoes National Park was first gazetted in 1925, as a small area bounded by Karisimbi, Bisoke and Mikeno volcanoes, intended to protect the gorillas from poaching. It was the very first national to be created in Africa.

Subsequently, in 1929, the borders of the park were extended further into Rwanda and into the Belgian Congo, to form the Albert National Park, a huge area of 8090 km2, run by the Belgian colonial authorities who were in charge of both colonies.

The park later became the base for the American naturalist Dian Fossey to carry out her research into the gorillas. She arrived in 1967 and set up the Karisoke Research Centre between Karisimbi and Visoke.

From then on she spent most of her time in the park, and is widely credited with saving the gorillas from extinction by bringing their plight to the attention of the international community.

She was murdered by unknown assailants at her home in 1985, a crime often attributed to the poachers she had spent her life fighting against.

Fossey’s life later was portrayed on the big screen in the film Gorillas in the Mist, named after her autobiography. She is buried in the park in a grave close to the research centre, and amongst the gorillas which became her life.

The Volcanoes National Park became a battlefield during the Rwandan Civil War, with the park headquarters being attacked in 1992.

The research centre was abandoned, and all tourist activities (including visiting the gorillas) were stopped.

They did not resume again until 1999 when the area was deemed to be safe and under control.

There have been occasional infiltration’s by Rwandan rebels from the Democratic Forces for the Liberation of Rwanda in subsequent years, but these are always stopped quickly by the Rwandan army and there is thought to be no threat to tourism in the park.

Below are the most loved gorilla safari packages that one wouldn’t miss will on his or her visit to Rwanda’s Volcanoes National Park. Even though the gorilla permit has increased there still more promotions that you can win!

Well the gorilla permit now cost US$1,500 to all gorilla travelers (Foreign Non – Resident, Foreign Residents, East African Residents and Rwanda Citizens). There are however, some new packages that have been introduced.

These include: US$ 15,000 for personalized & exclusive mountain gorilla visits for a requested targeted Gorilla family. US$ 30,000 for a minimum of 3 visitors for 3 consecutive days (Behind the scenes)

There are also special discounted rates:  30% discount (US$ 1,050) for combined trips within National Parks in Rwanda (Gorilla Trekking, Akagera and/or Nyungwe National Park) for at least 3 days during the months of November – May and then 15% discount (US$ 1,275) on conference delegates who stay pre & post MICE events to see gorillas.

Then for tourists visiting Rwanda and are interested to take short excursions or those on seminar and conferences in Rwanda here are trips to take and those on conference we can secure you discounted gorilla permit of $ 1275 USD per person. 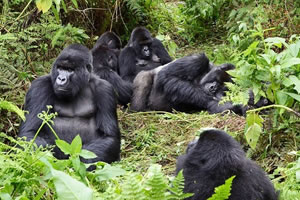 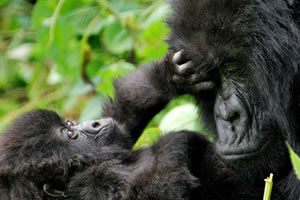 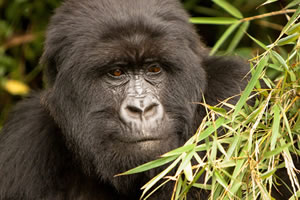 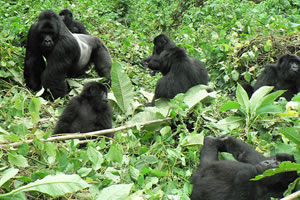 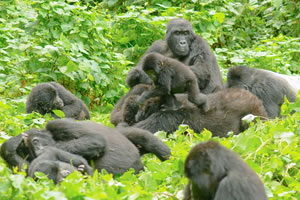 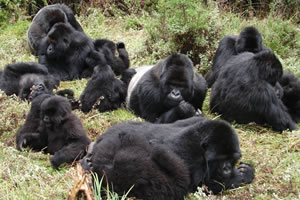 Nearby excursions to experience after gorilla trekking safari in the Volcanoes National Park include the Musanze Caves, Iby’wacu Cultural Village, Buhanga Eco Park and Lake Kivu offering the beach holiday and vacations like sand beach bathing, boat cruising with en-route view of the undulating landscapes, hot springs and enjoy the Kayaking journeys.

The park is best known for the mountain gorilla (Gorilla beringei beringei). Other mammals include: golden monkey black-fronted duiker, buffalo spotted hyena and bush buck. The bush buck population is estimated to be between 1760–7040 animals.

There are also reported to be some elephants in the park, though these are now very rare. There are 178 recorded bird species, with at least 13 species and 16 subspecies endemic to the Virunga and Ruwenzori Mountains.

Visiting the fascinating Volcanoes Park in Musanze previously well-known as Ruhengeri, which can simply be accessed by public transport starting from Gisenyi or Kigali on the very day of your tracking.

You will be required to arrive at the headquarters of ORTPN in Kinigi, at the park entrance, by 7:00 am, although this is not a very dependable option for those who hope to arrive by public transport.  However, there isn’t any public transport from Musanze to Kinigi.

It really does not matter when you want to tour the gorillas of Rwanda, you can see the gorillas all year round. Most visitors take on the months of June to September and then December to February since this is the time of the year where it does not rain heavily.

During the peak season, July to September, the permits are always on high demand. Booking the trip 3 months to your trekking date is very important.

admin - March 2, 2022 0
The "Parc National de Volcans" lies along the Virunga Mountains, with 8 ancient volcanoes, which are shared by Rwanda, Uganda and the Democratic Republic...

Best Tourist Attractions not to Miss in Rwanda 2022

admin - February 15, 2022 0
When you  here Rwanda, at first you think of the mountain gorillas and the genocide. But apart from those there things to do in...

admin - February 3, 2022 0
Go to the Iby’Iwacu Cultural Village which is a non-profit making organization that helps the reformed poachers. They help provide a better life through...

Best Luxury Eco Lodges to Stay During Covid-19 in Rwanda

admin - January 10, 2022 0
Are you planning to Visit Rwanda during the Covid-19 for the mountain gorilla safaris and culture at the Iby'Iwacu and Azizi Life Experience. You...

admin - November 19, 2021 0
Rwanda is just one of three countries in the world where you can see mountain gorillas, the largest primate in the world. Seeing gorillas...